If something can go wrong…

So we booked the 12th of April for surgery.

This means we have prepared Manuel (no food) and ourselves (nerves) and went to the animal hospital the 12th. Once there, they could not find any appointment at all (I can now see in Manuel’s journal a note on that we would be booked for surgery the 12th, but obviously something went wrong in the system). So they booked us for the next day.

The plan was that we could bring him home the same day as they by now knew he would recover must faster together with us, his family than being with strangers at the animal hospital. Yes it would require a lot from me and Mikael in terms of after-care but that we gladly would do and luckily the vet. trusted us.

Very late in the evening they called.

The surgery as such had gone well. They were able to remove the spleen tumour in one piece and it was now sent to the lab for analysis. However, he had had a lot of bleeding from Subcutis/hypodermis which caused a lot of problems.

Already then, Mikael and I agreed that after this, we would avoid bringing him to any animal hospital at all in the future if not emergency.

So – Manuel was forced to stay over night….

Poor thing, he was so so tired… As soon as he came home, he felt safe enough to let his guard down and just sleep, sleep and sleep.

We got pain-killers and  anti-inflammatory drugs. Again a high risk for nausea and vomiting was present. Not to mention that I now read all the fine print about the side effects and saw that one of the medications not was so good for the kidneys! Guess if I monitored his pain in detail making sure to stop as soon as possible.

His wounds healed just fine and he had a good apetite. He recovered very well…. 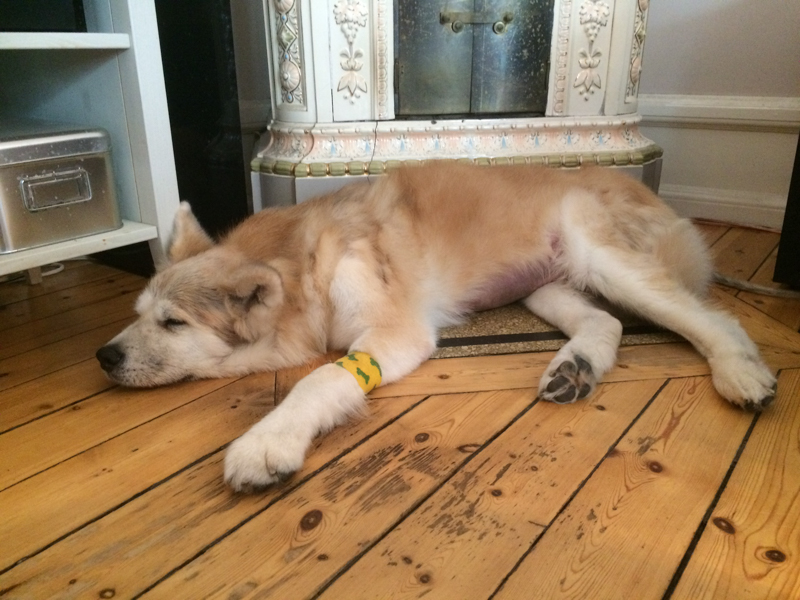 This content is written post mortem but the date is set as correct in to relation when it really happened. I think it is very important to share this experience and knowledge but I have not had the energy to do so, until now (2021).