It started when she was young

When Ella came to me as a puppy it didn’t take long until I noticed her bad appetite. She often had diarrhea. Even though it always has been important for me to buy (expensive) high-quality food – she did not eat. When she grew older I repeatable had to go to the veterinarian due to issues like fungus in her ears, and infected skin on her belly (due to itching). Her constant itching and sneezing drove me insane, to that point that I finally couldn’t sleep in the same room as her.

Eventually an acquaintance to me suggested that I should get her tested for allergies. In 2010 the result from the test came back and showed positive reaction on a high level to many of the substances tested.

I was suggested to try hypo-sensitization. This means she will get shots with the in the neck with the actual substance she is allergic to – hoping that the body will accept the substance and not reacting against it anymore. The lab responsible for the test results where Artuvetrin. This first step would last for 7 months and I got a schedule for when to give her the shots. She also got cortisone to ease the itch. I was always recommended to shampoo her often which I was very skeptical too, but I decided to give it a try. Every time I did that,  it actually increased the itching for a long period of time.

I quit the cortisone after a short while since it was hard to follow the schedule and that it affected her ability to control her bladder.

I must confess that after the 7 months of shots I didn’t request a prescription for more.

Now I have understood that we were supposed to see if we got any positive response on the treatment, and then reduce the dose gradually in cooperation with the veterinarian – but that did not happen. 🙄

She was recommended special dry food from Royal Canin – Hypoallergenic.

What a joke for an Akita!

It looked and smelled like Styrofoam. And she did not touch her food for two weeks – then I gave up. During this period I got in contact with a veterinarian named Wiktor Sandecki who is the creator of the food brand “Sund Hundmat” (frozen fresh food). I also visited him with Ella a couple of times. Wiktor’s opinion is that there are the two main-reasons behind a larger range of diseases (i.e. allergies) in dogs.

Well I actually called him, as writing to make sure I am writing correctly. 😉

1)      Too much preserved food (containing  grain, sugar). The food is also ”sterile” with no natural bacterial strain which causes imbalance in the bowel.

2)      Too much antibiotics to the bitch when carrying the pups (again: it wipes out the natural bacterial strain)

Ella had diarrhea in the beginning which is ”normal” when switching from dry to fresh food but she had and still has a great appetite! I tried to pour some hot water over the defrosted food so it became lukewarm and this made the trick! No more diarrhea! So I have continued doing that. She cannot eat liver, kidney (and similar) – that causes diarrhea.

I am convinced these are the two actions that helped Ella.

Today Ella is scratching herself slightly (mostly when shedding), but not very much at all and the skin is dry but has a nice colour and no skin infections, or ear fungus anymore. Her nose is still constantly snotty but she is not constantly sneezing anymore.

Yet another health issue

There is also a very very long story about her problems with a huge amount of cysts which she probably had had for many years. Of course this has affected her temper.

I will tell that story another time. 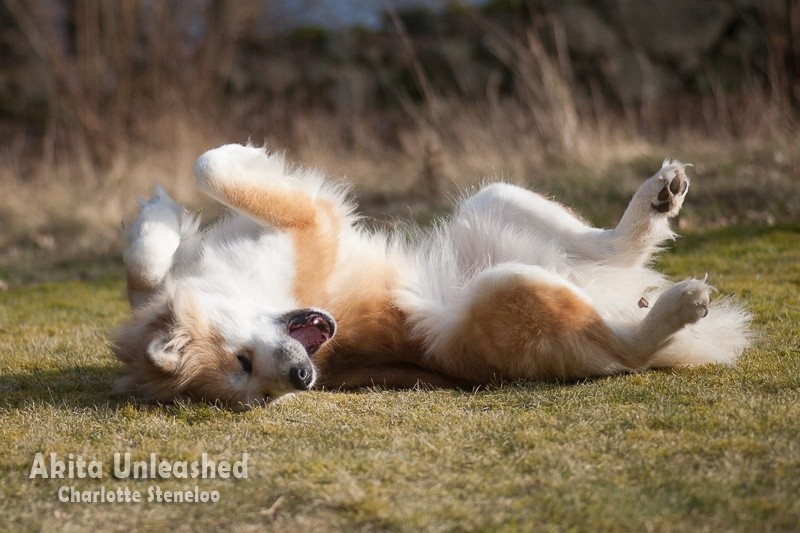