Some changes on Hilma’s situation

Since last post in the end of the summer we have had some changes on Hilma’s situation. Hilma was sterilized on endoscopy in the beginning of September. All went fine and Hilma was back on her normal condition in about week after surgery.

Autumns has been our problem after her first year. She has always had some type of skin infection and long regimen of antibiotics except  last autumn. I am assuming that the cause of these symptoms in autumn are dust mites. Those like moist environments and in autumn weather is wet. So maybe there is more dust mites in households during autumn than in normal conditions. After all she has also food allergies and these somehow combine each other and she also reacts easier on food (and to stock mites in dry food to what she is allergic to too).

Last year Hilma was on a strict fish, potatoes and vegetables diet and nothing else. She also ate then almost half a year Megaderm oil product with sustenance portion. This year I thought that now she is eating Atopica (100 mg daily dosage), those allergies would be cut-down and I could feed her with some flexibility. Since she did not like so much of Royal Canine Anallergenic dog food I change it to Hypoallergenic and she had that with her fish diet and she really liked that dry-food (Hilma is piggy-eater and she does not in general like dry-foods). She also has had Virbac Veggie Dents to keep her teeth in better condition. Hilma’s fish-potatoes-vegetables diet is basically mash and to avoid going to vet because of caries I wanted to give her both crunchy food and those dental sticks. That was a mistake, so maybe I’ll have to start to wash her teeth… There is hardly any other conclusion to this, because she does not eat bones and she is basically allergic to everything.

So what happened in this autumn was that Hilma started itching and she scratched to her neck some bold spots and with her teeth made bold spots on trunck. Skin was red and broken.

Now since Monday when the regimen started she has not scratched anymore and her skin is nice baby-pink in color. Here is a pic on one of those spots in her trunck, taken today. 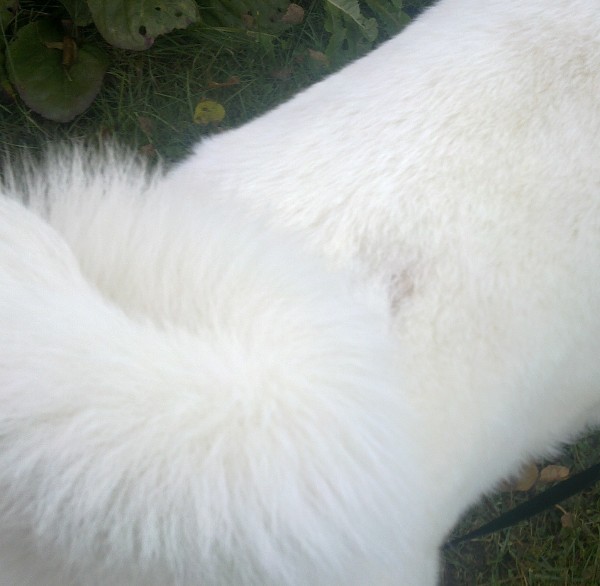 Not looking bad. Hopefully with cortisone, 15 ml daily dosage of Megaderm and strict diet would make a difference and she would not need to have antibiotics. Of course she is still having that 100 mg Atopica once a day.

Her coat is not in so good condition as in summer. It is thinner, but there is no brown sebum and she does not stink as SA-dog. So because of these things I am assuming that her symptoms are now caused by her allergies, not SA.

We’ll see where her condition develops. I’ll keep you posted. 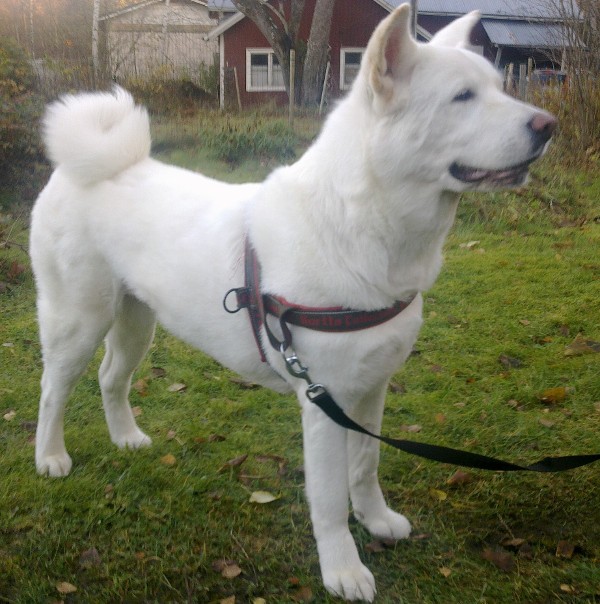 American akita owner from Finland struggling to get along with SA diseased dog.