What’s up with Hilma’s SA today?

Now it has been nine weeks since medication started and Hilma’s current condition has stayed basically as it has been for a month. Isotretinoin’s dosage has been lowered this week to 20 mg every other day and Atopica’s dosage is still in 200 mg/per day. Hilma does not smell anymore and some new hair growth is seen. Actually hair growth above her head near ears make now curls to her fur, maybe I’ll have long-coated american akita one day ;). Just kidding. No pictures for you because all those taken from white dog so near are all just a mess… One picture though below of her over-all condition taken today. 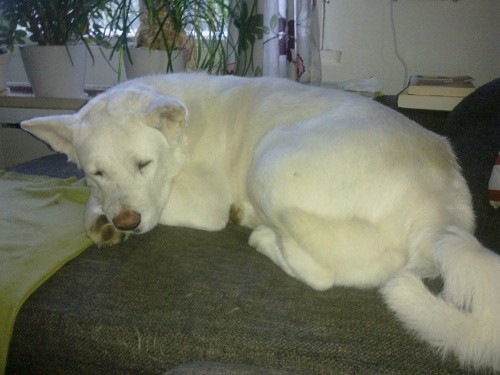 Fur that did not come off from her butt and tail has stayed there. Also some old hair is below her neck. Basically all the other undercoat is now new one.

Hilma has all those same supplements as in the beginning. Only thing that has changed (including isotretinoin’s dosage) is that I wash and oil her only once in a two weeks now. Coat gets dry in this period of time and in my opinion it needs to be oiled. I don’t want to put oil to dirty skin to avoid bacteria and maybe inflammations, so I wash her before oiling. I have also bought new product, Humilac Oil-free moisturiser for dry skin. This contains propylene-glycol which is recommended in treating SA. I don’t know though if it has any advantages, but Hilma is sprayed with that occasionally, maybe once a week.

Plans for the future

And what is planned for the future is that isotretinoin is quitted completely during this summer. I also want to cut down Atopicas dosage, but first I’ll have to try how she reacts to quitting down of isotretinoin. Also Hilma needs to be sterilezed to moderate her hormone levels. I have planned for a few years to do that in endoscopy and maybe next summer could be suitable to do that operation. I’ll keep you posted on what’s up whit us.

And here is one link for those people who are interested in american akitas health situation in general: The Akita Club of America National Health Survey 2000-2001.

American akita owner from Finland struggling to get along with SA diseased dog.