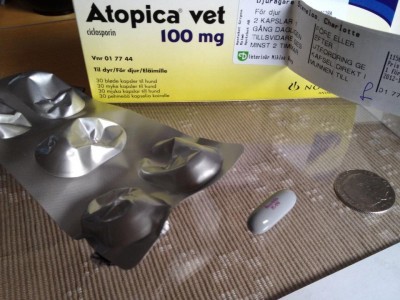 On Atopica for 1,5 weeks

We were very doubtful to the use of Atopica (as I wrote in an earlier post), and still are but I have to admit it seems that it has slowed down the aggressive pace (so far).

As writing he has been on the medication for one and a half week.

It comes in the shape of  large capsule, this is so that the content will pass the stomach before releasing it’s content – Manuel takes two a day.  The idea is to start with a huge dose, and then decrease it to 25%.

Atopica is so expensive

Today this costs us nearly 2500 SEK a month (278 Euros) ! But he is a family member and there is nothing we wouldn’t do for him. I would starve before making life worse for him.

Food decreases the effect of the medicine but if too many side-effects such as sickness or bad stomach food can make that better. So you need to study the dog all the time reflecting on the reactions based on how you have chosen to medicate.

Manuel was strikingly affected. He was nauseous  and four hours after the pills he was whining shortly as when hurting a paw. He was clearly having small pain attacks.  :-S Me and Mikael agreed upon that this could only go on for a few days, then we would stop. Our vet had told us that these kind of problems could occur, but also that they most probably would disappear after a few days.

He came “asking for help” and we let him lie in the couch next to one of us and while talking to him and stroking him.

The next days until today

The pattern changed (luckily) and now it is the same pattern. We give Manuel the pills. Two-three hours after that he gets food. Four hours after the pills (when the content has been released into  the intestines) he experiences a feeling of getting very very warm so he want to lie outside for a while, and we have the balcony door open (freezing our butts off)  of course so that he can come in whenever the “attack” is over. Otherwise he does not seem to be in any pain.

Six hours after the pills when we go out for the evening walk he has a minor diarrhea.

We try to brush his teeth every day since we read that on humans this could prevent one of the side effects  – problems with the gums. I have no idea whether it is helping but it is no problem since we must have daily check-ups of Manuel anyhow. Check for new aggressively attacked spots (treat them) and maintain the skin quality of the spots that are “calm”. Of course it is very important with daily check-ups no  matter what, but especially when trying out this medication. I have a check-list I fill in every day. /Charlotte